​By Ashlea Buckley (Editor for TOWCB)
Ashlea: Please tell us a little bit about yourself?

Daniel: Thanks for having me. My name’s Daniel Nagy, but in the virtual world a lot of people know me as AidanLynge. I’m one of the admin of the Assassin’s Creed Hungária community, which is a hungarian group with a lot of good people. I’m 25 years old. I’m still a student but still learning programming for my future job.

​Ashlea: When did you become a fan of Assassin's Creed?

Daniel: A day after my elementary school we went to my friend’s house and decided to play something cool. We first played Need for Speed, but that doesn’t help us to relax, after that he showed a DVD box, the name’s Assassin’s Creed. I think we played it on XP, so it was really cool and enjoyable. That’s the time I still playing this awesome franchise.
Ashlea: Which was the first game you played?

​Daniel: Just as I mentioned before, Assassin’s Creed was the first one I played, I really enjoyed, at first I didn’t care about the lore or the main characters, but then it really got me.

Ashlea: How did the Assassin's Creed Hungary Fan Community arrise? How big is the community?

Daniel: This is a hard job to keep the balance in the community. To be honest, I was once another "group" or "community” admin, but that was not working properly. After that I met this one, which is very attractive and developing, and the perfect place for me.

​The community is very big, if I count the facebook page and group, I can say we are definitely growing and we want to keep that going.
​
We have great admins, who are the biggest fans in the community, and that’s why they’re the best, but the community as well.
Ashlea: What projects have Assassin's Creed Hungary worked on?

Daniel: My personal project is kinda like a lore base series which will be the Assassin’s Creed Hungary Lore in our mother language, so it takes a lot of time to work on this project. With the other admins we have a plan to participate in an IT event to represent us. Also we’re planning to go one of the AC Symphony concert in the future from Milano.
Ashlea: What are the challenges you have found in managing a community?

Daniel: Stay active! That’s our motto, but this is the truth. Beside of the work in AC Hungária, we’re managing this community as a hobby as well. We’re really like to work as main job in this community and everyday give content to our loyal members.
Ashlea: Have you attended any Assassin's Creed events?
​
Daniel: We had little events when Assassin’s Creed Revelations and Black Flag came out. The company who worked in as a publisher in our country organised these events. We could try the new games before the day it should be released and there were a lot of competition where you could win a lot of AC related gifts.

Ashlea: Have you ever attended any events in cosplay?

​Daniel: Actually not, I didn’t do any cosplay at all, but it’s good to see that our community are trying to make awesome outfits and collectibles on their own creativity.
Ashlea: What are the future plans of your community? Where do you See yourselves in one year?

​Daniel: We have high hope to work with Ubisoft on our common project as well.
Ashlea: What are your prediction for Assassin's Creed in 2020?
​
Daniel: I really want to go back to Rome, which was a rumour, that we could able to go back to the ancient Rome, but honestly, I really love playing in different eras, but I could see an AC, which could be play in Hungary. I don’t say that’s impossible, but our history is not so popular abroad. My fellow admins say they could really imagine a Far East or a Viking story as well…which could be possible because of the new rumours. I could really enjoy that as well.
Ashlea: What is your favourite part of being a community member?

​Daniel: To belong somewhere. I’m not a popular guy, who really enjoys the late night’s or drinking parties. I really like helping people to understand this amazing world of Assassin’s Creed. This is my relief, this is my "job”, but also a hobby as well and I could see myself as a director of our community later.
Ashlea: Which is your favourite Assassin's Creed game?

​Daniel: Hard to decide on that, because i really loved every part of it, but if I have to decide, then I should say Rogue. Strange, but it was a really big turn on the franchise where we were Assassins once, but then joined the Templars. I also love Revelations, it was an emotionally rich game of the franchise where we finished the Ezio’s line, I really like that as well.

But in the new direction of the game, I really love Odyssey as well. I’ve never played an RPG before Origins, so it was a really good way to know this RPG world, also loves Greek history as well. Which game made you fall in love with the franchise?

The first one. If I don’t know that I could barely imagine myself in here as well. It started me thinking that could be an awesome franchise and here we are after so many games of it, and still loving it.
Ashlea: What is your favourite item in your assassin's creed collection?
​
Daniel: I wish I could collect more of these thing, because I only buy the books/comics and the games, but I have the Freedom Cry edition of AC3 and Buccaneer Edition of Black Flag. When I set my own apartment, I’m going to start collecting every collectible I could have.
We would like to thank Daniel for joining us for this round of Quick-Fire Community Questions.

You can find the AC Hungaria Community on: 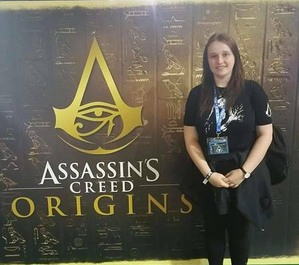