Back to Articles
Our Admin Col_96 conducted an interview with Chantel Riley, who provided the voice and motion capture performance for Layla Hassan in Assassin's Creed Origins! 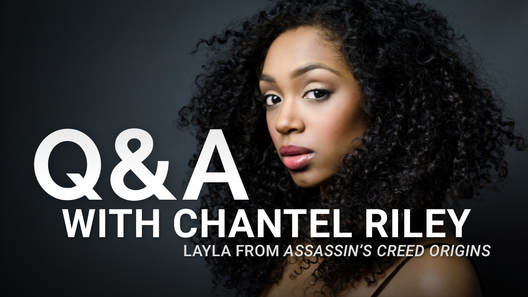 Col: Hey Chantel, thanks for joining us today! It's great to have you here for your first Assassin's Creed Community Interview!

Before working on AC Origins, had you played any of the games before? If so, do you have a favourite?

​Chantel: Actually I have not played any of the games but I always knew about them. I remember always being very drawn to its beautiful graphics and animation. I never would have thought that after all those years I would get the opportunity to be a part of a great game.
Col: Had you done much voice acting before working on AC?

​Chantel: AC Origins is my first Voice Acting job.
Col: How did you find the voice acting/ mo-cap experience?

Chantel: AC is my very first for both! Pretty dope one to start with if you ask me. I got to give my respects to voice actors around the world, especially the video game world. I learned a new division of acting through this opportunity. Its more than just going into a studio and recording some dialogue and grunts. It becomes you and next thing you know, your entire body starts getting active and helps with each line or audible sound. Mo - Cap was so cool. I've always wanted to try it out. So watching the game play and seeing Layla walk and talk and knowing they were my movements, was so crazy to me. #ILoveTechnology
Col: When you auditioned for the role, did you know it was for a video game?
​
Chantel: I did know it was for a video game but I didn't know which one. I didn't learn what game it was for until I actually booked the role. I was very excited and so was my brother since he is a big gamer.
Col: Layla is the first third person playable Modern Day character since Desmond Miles. Did you feel any pressure at all when working on the project, knowing that fans were eagerly awaiting the return of playable Modern Day?
​
Chantel: I think overall, I just wanted to deliver the best performance I could. I try not to allow the pressure to get to me because I know it will affect my performance in a negative way. So I focus on how fun the project was instead.
Col: Concept art for Layla was actually leaked before launch due to an art book. Did you see how much hype and excitement this caused within the AC Community?
​
Chantel: I did do some digging around about the leak and did see the excitement about Layla and the game. So of course, I got excited with them.
Col: How would you describe Layla to a friend?

Chantel: Layla is a highly intelligent and strong willed woman. She is courageous and won't stop until she is on top and gets the recognition she deserves.
Col: Do you have a favourite Layla line?

Chantel: I love when she says "F-- you Abstergo, I'm seeing this through". Its kind of like her war cry. So powerful. (Sorry mom...lol).
Col: One thing that sticks with me when thinking about Layla is the respect that she shows when discovering the Mummies of Bayek and Aya within the cave. After intense Animus sessions, do you think she feels connected to them, possibly due to the bleeding effect? (even though they're not related in any way)

Chantel: Definitely! I feel as though there is a much deeper connection than we think while entering into anyones past or psyche. Seeing what they see, experiencing what they experienced, I feel would have some affect on Layla.
Col: Have you ever been to Egypt before, and do you know if Layla's cave actually exists? If so, would you ever consider visiting?

Chantel: I have never been to Egypt but would love to visit one day. There is a tremendous amount of history that I would be interested in learning about.
Col: In the Laptop files we discover that Layla actually contributed towards the Madrid Animus, seen in the AC Movie. Have you seen the Movie?

Chantel: I have! ​
Col: Have you seen much of the creativity within the Community, such as Assassin’s Creed Origins Fan Art/Cosplay Projects/Videos etc?

Chantel: I had a chance to watch some youtube videos of fans playing the game.
Col: Did you enjoy working on Assassin's Creed Origins, and would you ever return to the brand if asked?

Chantel: I had an amazing time! I would love to come back if they ask. (Fingers crossed).
We would like to say a massive thank you to Chantel for joining us for this interview, and to everyone at Ubisoft who made it possible!