Back to Articles
﻿﻿﻿ By Colum Blackett

​
I recently attended The AC Movie Press Event in London, and saw the first 20 minutes of the upcoming Assassin's Creed Movie (Amongst many other things). This article is written from my memory and a few notes.


So the movie begins with an Eagle soaring over New Mexico, showing us a high angle shot of the sand below. After flying over several isolated buildings, we zoom in on a small town. The music playing is Young Dead Men by The Black Angels, a song that I thought worked very well with the scene. The lyrics especially made it work. "Run for the hills, pick up your feet and let's go"

The Eagle flies off, and we focus in on a hooded young boy riding his bike through a quiet, dusty town. After several cinematic shots showing the boy biking, he bikes towards his home and gets off the bike. The lively introduction music that was playing fades out, and we the boy slowly enters his home.

A new song starts playing through a record player, creating a creepy atmosphere. The boy calls out for his mother as he comes in through the back door. The next shot we see is of a woman sitting in a chair, staring accross the room. Blood can be seen on her chest, and it becomes apparent that she has been stabbed. The camera slowly pans accross her body, and we see that she is holding a strange looking necklace with the Assassin insignia. The necklace is wrapped around her hand, and is covered in blood.

The boy walks towards his mother slowly, looking at the injuries inflicted on her. The camera pans towards the right hand side of the room, and we see a hooded man facing the other way. Whispering to himself he says "Laa shay'a waqi'un moutlaq bale kouloun moumkine." (Nothing is True. Everything is Permitted). It was nice to hear the Maxim of The Creed again, but this was a super creepy scene!

He turns around, and the camera zooms in on his face. He is a bearded man, and looks like he is possessed. The boy nervously says "Dad", and the man begins to walk towards the boy. The camera focusses in on his hidden blade, dripping with blood. His dad, looking menacing in a dark green hoodie, ​walks towards his son. In the distance we hear sirens approaching, and Joseph says to his son "Your blood is not your own Cal."

As the police cars slowly pull up, Callum runs out the door as his father is arrested. As the cars pull up, we see a Templar Cross Necklace (The Ubiworkshop one) danging from the inside car mirror. (It was the exact same one that I was wearing at the time, and Justin Kurzel had actually noticed we wearing it earlier that day) 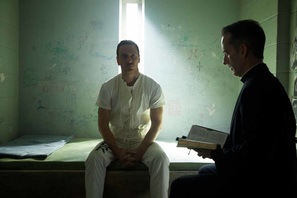 As the police enter the house, the camera pulls away and focusses on Cal, freerunning accross the rooftops. We see several slow motion shots, as he jumps from roof to roof. As the sirens fade away, we cut to present day, and Lynch is now sat in a prison cell drawing. We see his wall, and the entire segment is filled with dark sketches. ​

After several seconds of watching Cal sketch away in his cell, we see a guard talking to a priest. "All he does is draw. It's against the rules, but what can we do. Man likes to draw" says the guard, looking at Cal on the CCTV monitors. We are then told by the guard that Callum beat someone to death. The priest enters the cell to speak to Cal, and sits down beside him. Lynch looks at the priest and says, "Are you here to save me".


The priest asks Cal if there is anything he can do to bring him comfort. Cal says that there is a poem that his mother used to say to him as a kid. (It's an extract from "After Apple Picking" by Robert Frost). The priest and Cal recite the poem together, and then we see Cal being taken to the Execution room. In the room Cal is strapped to a machine that will give him a lethal injection. 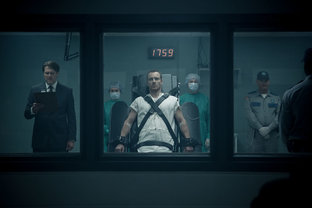 Lynch appears to show no remorse, as he looks at the family members of the person he killed through the glass. He is asked if he has any final words and he says "Tell my father i'll see him in hell". With this the clock hits 18.00, and we see the liquid being pumped into his arm. This is quite a horrible scene, as Lynch realises that he about to die. Bits of this execution scene can be seen in the first 30 seconds of the trailer.


​As Callum falls asleep, the camera goes blurry then dark. He then wakes up next to a woman, who tells him that her name is Dr Sophia Rikken. He's in a hospital bed, and is extremely weak. "Where am I" he asks. "At 6pm yesterday evening, you were executed, and pronounced dead. You no longer exist".


She tells him that he needs to take some time to recover, as they have to use a liquid so strong that it makes the prison guards think that the convict is dead. "It's the only thing strong enough to get past the guards". She tells him that he is now her patient at an Abstergo facility, and she is going to help him get better.

Cal gets out of the chair and tries to escape. As soon as he gets up, his legs give way and he falls into the corridor. Sophia says that it's okay to the guards, and Cal slowly limps around the facility. He sees many other patients wearing the same white outfits that he is wearing.

The Abstergo Facility looks like a hospital, and is extremely white and clean. Cal slowly runs underneath the Abstergo logo, and stumbles onto the floor. Getting back up, a little girl says to him "Your blood is not your own". This is the same line that hie father said to him earlier in the movie.


Cal gets up and continues his slow run around the facility. He enters a room that is filled with trees and plants, being attended to by other patients in the facility. Cal slowly walks towards the edge, where he bumps into Michael K. Williams who says Nothing is True. Everything is Permitted. (In Arabic)

Cal walks towards the ledge, and we are shown the building that he is being kept in. The Abstergo facility is in an old church in Madrid. Cal looks out at the city and he is told that there is only one way to escape this facility.


Sophia enters the room with Abstergo guards and Michael K. Williams says "The walls have eyes". Cal looks at the guards, and at the height below, considering whether to jump or not. "You are not a prisoner here" Sophia says to Cal. "You can leave whenever you chose". We are then shown Alan Rikkin, watching the entire thing. Panning across his office, we see the Aguilar's crossbow on his desk. We also see a vast collection of weapons, including hidden blades. 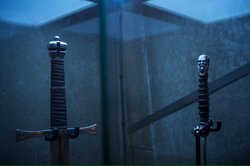 Cal looks around the room, and is hit with a tranquiliser dart. Sophia is furious that her patient has been subjected to violence already, but the guard replies tells her that her father ordered it.

We are then shown Aguilar and Maria running away from a group of Templars. The fight through several buildings, using several weapons including throwing knives and bow and arrow. Maria is especially talented with hidden blades.

The fight breaks into several houses, and after killing many enemies, the two Assassins take to the roof tops. We see several long jumps accross buildings, as the Assassins are chased by their enemies. They both jump into a tunnel, and kill the remaining Templars with hidden blades. The fighting is quick and clean, something that can be seen in the trailer.

​
We then cut back to modern day as Callum wakes up. Sophia says "Prepare the Animus" and Callum is strapped in. This scene needs to be edited digitally, as it currently just shows Cal climbing wooden planks. It's like an indoor freerunning course, but with editing, will probably look more like the structures that Aguilar is actually climbing.

I really enjoyed the event, and the footage was amazing!
Images from UbiBlog
Powered by